Tom's Diner to Shine Bright Again as Construction Gets Underway 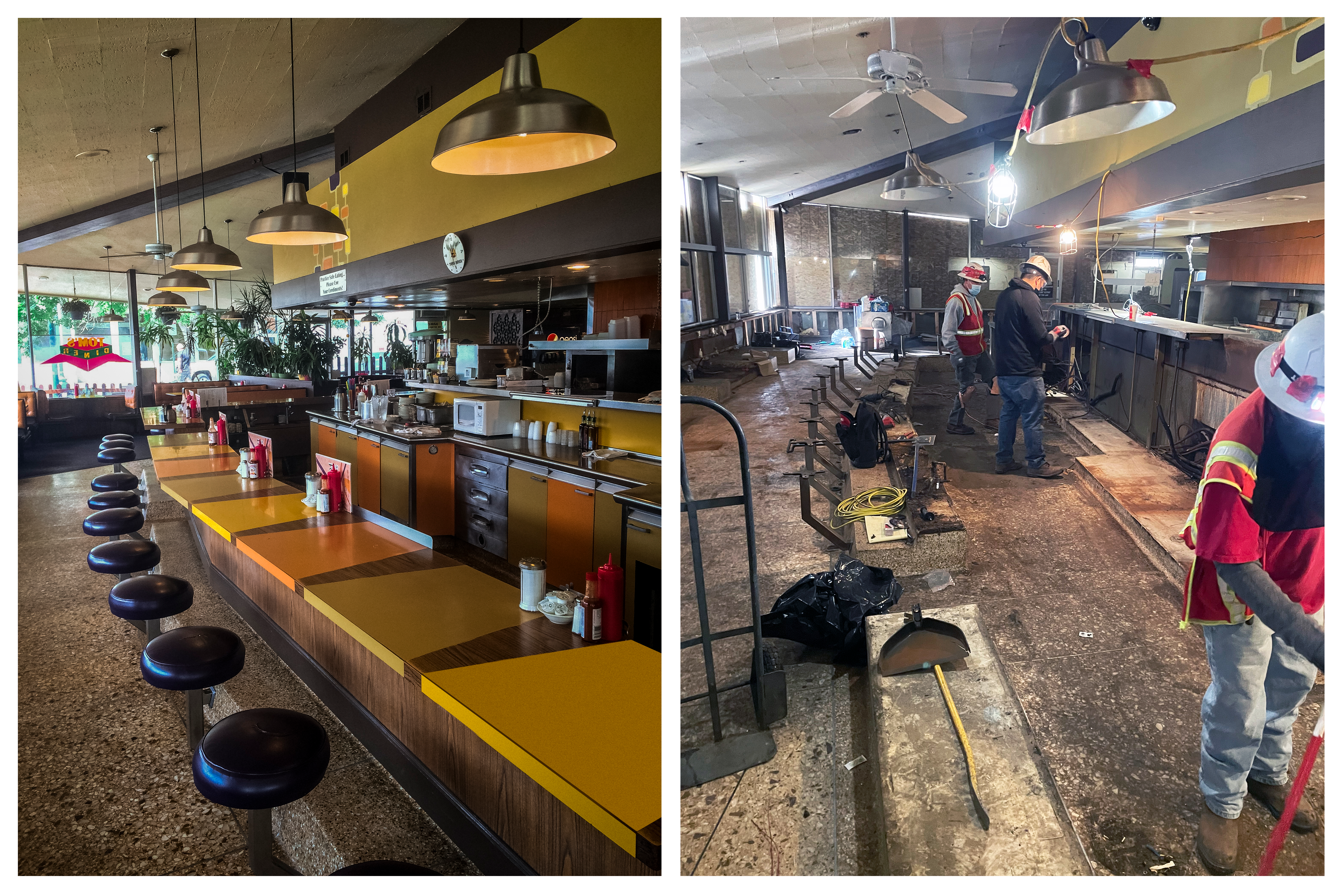 Denver, CO - Construction is underway on a reimagined concept for the 1967 Googie-style building at 601 E Colfax Avenue. Tom’s Starlight, a modern indoor/outdoor "oasis in the city," will be ready for guests in late summer of 2022 following an expected six months of work.

Formerly Tom's Diner, an iconic 24/7 hotspot owned and operated for more than two decades by Denverite Tom Messina, the building was at the center of local preservation efforts in recent years. Those efforts by GBX Group LLC, Historic Denver, Colorado Historical Foundation, and Messina himself, ultimately landed it on the National Register of Historic Places and saved it from demolition nearly two years ago.

Renovation plans call for a build-out of the original space, a unique design pioneered in the mid-20th century by nationally recognized Los Angeles architecture firm Armét & Davis that designed all nine White Spot restaurants, which was the original business at the Colfax Avenue location.

Aided by local bank financing and a government-backed Small Business Administration loan, the work involves a significant interior renovation and complete exterior rehab, including new storefront glass and an outdoor mix of uses to support a unique indoor/outdoor experience. However, the building's nostalgic facade will remain, resulting in a creative blend of old and new.

Beyond the nostalgia and entertainment value, the project will also generate a significant economic impact for the area. A recent study by Rutgers University found that the building rehabilitation will create more than 40 local jobs and $2.4 million in labor income, driving a one-time $7.1 million economic output. Once complete, the annual operation will support nearly 70 direct and indirect jobs, $2.8 million of income, and annual economic output of $7.7 million. The net result is millions of dollars in new tax revenue at the local, state, and federal levels.

The project represents an ideal outcome for all involved. "When you draw it up, this is what you want to see," Taylor Turano, Founder of Denver Land Company said.

Turano went on to say, "Every step of the way, with every public and private entity involved, from the preservation to the coming commercialization of this Denver landmark, the collaboration was there. Now the community will reap the benefits, along with the potential for new developments along Colfax that could further add to the atmosphere of the revitalized diner."

Messina, who continued to operate the space as Tom's Diner until closing it in March 2020 amid the COVID-19 pandemic, was saddened to see his namesake become the target of continued vandalism in the past year and a half that it sat empty. But he has his sights set on better times ahead.

"It was heartbreaking to witness after all the years of hard work," Messina said. "Now it’s a new day, and I look forward to celebrating the rebirth of Tom's with our community, partners, and all of Denver."

As published on PRNewswire: https://www.prnewswire.com/news-releases/toms-diner-to-shine-bright-again-as-construction-gets-underway-301460901.html?=prn